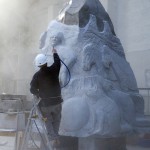 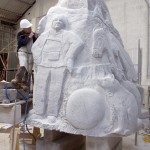 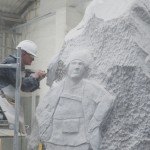 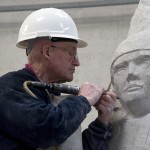 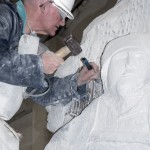 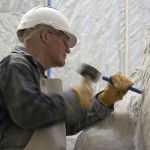 Born in Aberdeenshire in 1946, Bruce went on to serve a 4 year apprenticeship as a monumental mason with William McKay & Sons in Aberdeen. At the same time he attended Aberdeen Technical College studying all aspects of stone carving as a day-release student, as well as attending Gray’s School of Art in the evenings studying life drawing, lettering and stone carving.

While at William McKay’s Bruce developed his skills as a stone carver as well as working in the sand blast carving department. He also developed the technique of diamond hand-engraving on polished black granite – among the first to be done in Aberdeen. At this time he also pursued an interest in glass engraving as an extension to his stone carving skills.

Over the next few years this expanded from a part-time to a full time business engraving glass.

In 1975 Bruce set up own business hand-engraving quality glassware and stone carving, he then established a studio at the old school at Kirkbuddo in Angus which was in operation from 1975-1997. In 1997 he relocated to Kirriemuir and established a new studio at the craft units in Cumberland Close.

Bruce Walker has been carving stone since 1963. Training as a carver of granite in Aberdeen has enabled him to carve any stone. He has worked not only in granite but also sandstone, marble, limestone and soapstone. He worked with Denfind Quarry in Angus and carved several sculptures with their stone. He has also worked on Sheirglas – a hard Scottish limestone from Pitlochry.

In 2012 Bruce established a new sculpture workshop at the Hillhead Industrial Estate in Kirriemuir. The premises are able to accommodate large sculptures of up to 30 tons or more. Around this time Bruce began to use granite from Craigenlow Quarry at Dunecht, Aberdeenshire. He also sources granite from nearby Kemay Quarry.

In 2012 Bruce carved the impressive Scott Wilson Memorial sculpture at Glen Prosen in Angus. It is carved in Craigenlow granite and completed in the centennial year of Captain Scott and Doctor Wilson reaching the South Pole and their subsequent deaths. It depicts the relationship between the two men and their association with Glen Prosen.

More of Bruce’s larger stone sculptures include public sculptures in Angus, Fife and Perthshire, as well as several which remain in private collections.

His smaller sculptures are mainly in private collections and include fountains, sun dials, coats of arms, statues and memorials . His preferred style is abstract, but has done a lot of figurative carving, and any carving can be created according to the customer’s requirements.

Bruce has also been engraving glass for 45 years and has pieces in private collections across most of Britain as well as many countries around The World. He specialises in engraving wild life and buildings, but any design can be created to order.