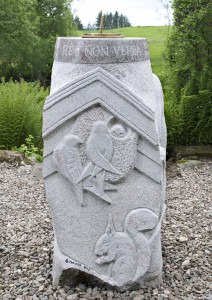 The sundial was sculpted from Craigenlow granite from Aberdeenshire. When the Scott Wilson Memorial Sculpture was made for Glen Prosen, a large piece was sawn off the granite to make the base. The use of this piece of granite was very apt as the sundial was to commemorate the life of Dr Edward Wilson.

The client’s wish was to depict the life of Dr Wilson while in Antarctica and at Glen Prosen. He was Captain Robert Scott’s Chief Scientific Officer on the Terra Nova expedition. He was a great friend and advisor to Captain Scott and a vital member of the expedition. Edward Wilson was one of the party to reach the South Pole in January 1912, but tragically perished in March1912. 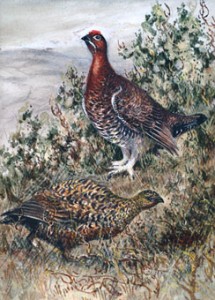 Dr Wilson was commissioned by the government to conduct the Grouse Survey. His task was to ascertain why the grouse population was in decline. He discovered this was caused by a parasite by his careful scientific approach. Heather is now burnt to destroy these parasites. Edward Wilson in fact, finished writing up his grouse survey findings on his voyage to Antarctica.

Mr and Mrs Reginald Smith owned a cottage, which at the time was a hunting lodge, and Edward Wilson stayed there when he was working in Angus. Captain Scott visited him there and they did much of the planning for the Antarctic expedition, on which they both sadly died.

This video shows the construction of the sundial;

Bruce’s thoughts on The Sundial

This sculpture is purely in memory of Dr. Edward Adrian Wilson. It is carved from Aberdeenshire granite. I used a piece weighing about 2 tons which had been cut off the granite block used for the Scott Wilson Memorial Sculpture in Glen Prosen, Angus. This gives a nice connection between the sculpture at Scott’s View and Burnside Cottage where Dr Wilson stayed.

Edward Wilson, apart from being a surgeon, scientist and naturalist, was also a highly accomplished artist. My client wanted me to capture Wilson’s artwork on the sculpture in the form of a sundial. I was to capture some of the paintings and drawings he produced in Glen Prosen and Antarctica and thus link the two places. 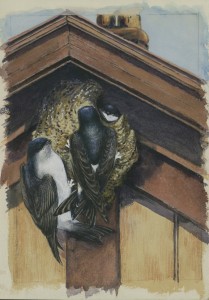 The drawing of the house martins in the eaves at Burnside was drawn on the back of an envelope by Edward Wilson. It was difficult to capture a delicate drawing on rough granite, so I made them slightly larger than life. Throughout I tried to keep the rugged feel of the granite.

The red squirrel is very important in this area and was a delight to carve as it is one of my favourite animals. The red grouse was very important as it was the reason for Edward Wilson staying in Glen Prosen. He was there to study grouse and find a reason for their decline. 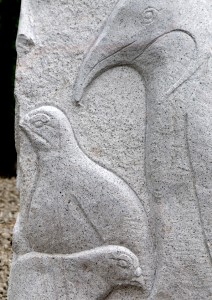 Close-up of the carvings on the sundial.

For the Antarctic carving we decided on the Weddel seal and the Snowy Petrel. The background is cut away, leaving a rough tool-finished surface. The creatures are carved in relief with a fine chiseled finish, enabling me to keep true to rough hard nature of granite. I feel granite is a nice stone to use for this sculpture as it is quite sympathetic to the scenery of both Glen Prosen and Antarctica.

I think the most important part of the sundial is Wilson’s motto “Res non verba”, which translates as “Actions not words”. This is how he truly lived his life. The top band of the sundial was shaped and then laboriously hand polished. This gave a nice contrast to the rough granite and allowed me to put detail into the letter carving which was important. Edward Wilson was a man of strong Christian faith and this is reflected in the inscription around the polished top of the sculpture.

I very much enjoyed carving this sundial as I am a great admirer of Dr. Edward Wilson.